without surgery, botox, fillers and even thread lift. 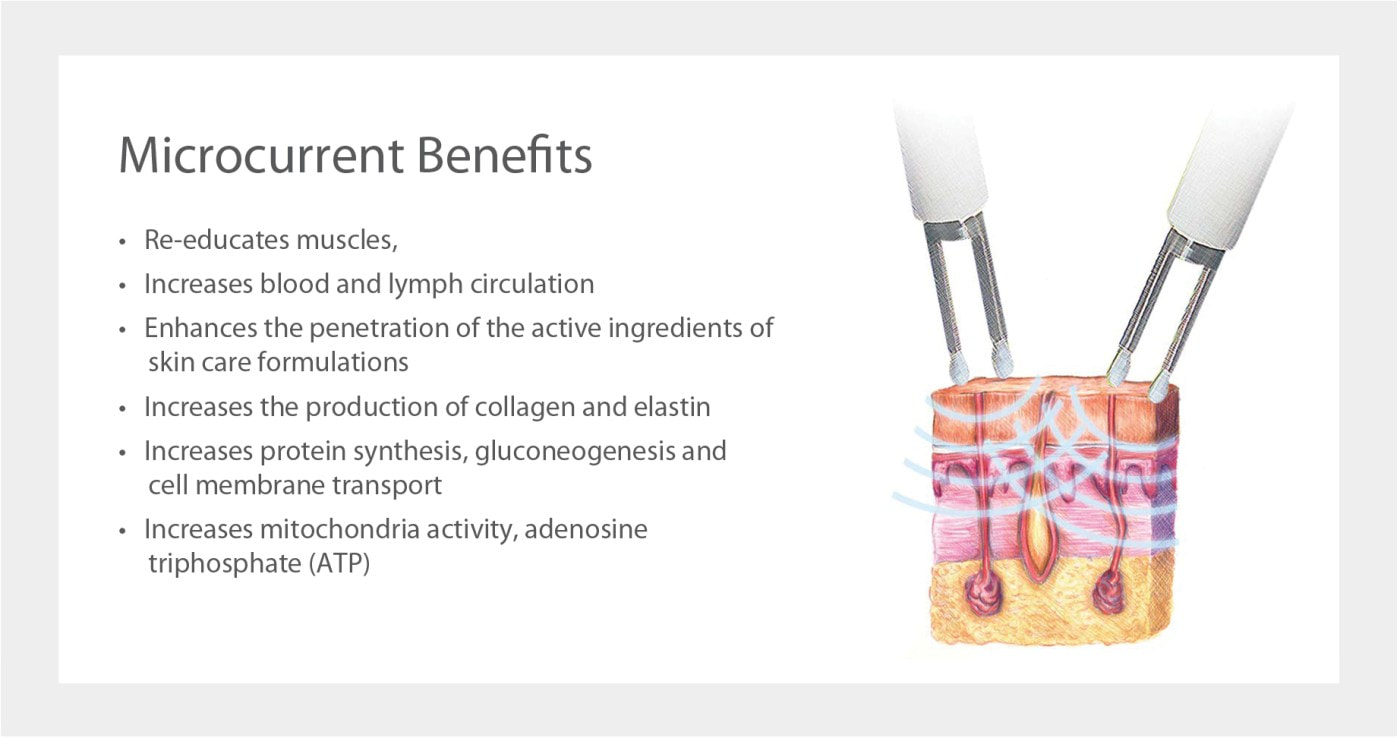 
MICROCURRENT
​Microcurrent stimulation delivers tiny electrical impulses that mirror the body’s own natural bio electrical field. In most cases, treatment is virtually sub-sensory, with just a slight electrical tingling sensation.
Originally developed for treating facial palsy microcurrent therapy is now also used widely in physiotherapy for pain control and in hospitals for wound healing. As an aesthetic treatment microcurrent stimulation has been shown to have a number of other cosmetic benefits:

Microcurrent in aesthetics is commonly described as “facial toning or non surgical face lifting” due to the dramatic lifting effect that microcurrent has on facial muscles and facial contours.

True microcurrent uses a current with an intensity of  less than one millionth of an amp (< 1mA) and because of it’s low intensity it does not cause a physical or visual contraction of the muscle,instead, microcurrent stimulation works by a process called muscle re-education.

In the 1960’s Drs S. Baker and S.Doyle demonstrated that effective and long term muscle re-education could only be achieved using microcurrent if ultra low frequencies (less than 1 Hertz)  were used.
In his book, The Body Electric Dr Robert O. Becker, indicates that to be effective microcurrent impulses need to be delivered using a modified waveform that is able to overcome the body’s natural resistance to current (Ohms law) without causing client discomfort.
Combining ultra low frequencies with a modified waveform enables the microcurrent to recharge the electrical potential of the muscle by stimulating the spindle cell fibers that run the length of the muscle and attach to the golgi tendon organ in the belly of the muscle. This golgi tendon organ (GTO) simulation technique was developed by Dr George Goodheart in the late 60’s.

During treatment all 32 facial muscles are physically manipulated using soft cotton tipped wands (probes) or other attachments that transmit the microcurrent impulses.

Working a muscle from belly outward will have a lengthening/relaxing effect that is necessary on muscles that have become contracted over years of facial expression (eg frown lines). Working a muscle from the origin and insertion point inward will have a shortening effect that is necessary for the majority of the muscles that have become elongated over time due to age and gravity.
​
Although a remarkable difference is seen after the first treatment, the benefits of microcurrent are cumulative and typically a course of 12 treatments will be required for optimum results.

letitout - Love the service, no hard sell. Good recommendation and details explanation. My first ever experience with CACI machine, the result was unbelievable and actually lasted me for more than 3weeks. I actually asked for a facelift, and on the 3rd day, i realized and felt neck was also lift. Its an amazing treatment. Highly recommended to all who needs a lift. Best of all it can be done daily. Thank you so much.

Latifa K - I recommend this place. The staff has lots of experience and well trained and the spa is very clean. I am impressed by the quality of my treatment. For first time comer, this is nicely priced for you to try it.

eva tigerlily - I’ve tried a few facials at other salons but none of them could compare to SWUK. I tried the CACI facial & after a few sessions I could feel the difference. My face is much more smoother & my jawline is more defined . Therapist Sandie was professional & would explain every step during the treatment. I thoroughly enjoyed her lifting massage & MTM eye therapy & would always look forward to the next session .
Recently , I had an acne breakout and therapist Myra did an excellent job with the exfoliation & extraction. She was meticulous & patient throughout the whole facial.The MTM eye therapy was so relaxing that I fell asleep . Friends commented that my face is fairer now. I just signed up for another package & am looking forward to my next facial appointment .